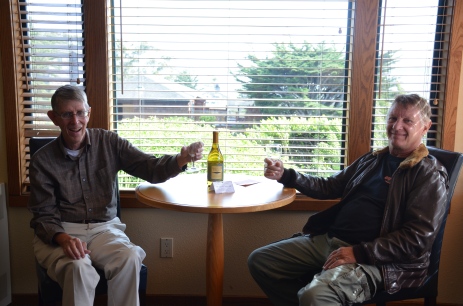 Traveling along the beautiful Sonoma countryside, we made our way into Bodega Bay late afternoon. We had learned earlier in the day that Bodega Bay was first used by the Russians as a base for their operations at Fort Ross, and it remained their main harbor even when the base camp was moved to the Farallon Islands.  It was then called “Port Rumiantsev.”

Did you know that Bodega Bay is the site where the movie, “The Birds” by Alfred Hitchcock, was filmed?  We didn’t! The location of our inn was the place in the movie where the socialite visited the general store and post office.  When she drove across the street, she visited the fishing store, which is now The Tides Restaurant (pictured upper right).  The original restaurant was quite small, but the new one has banquet facilities and a gift shop featuring “The Birds” memorabilia.  Pictures taken of the actors with signed autographs also decorate the walls there.

We drove to the town of Bodega, located just a few miles inland from Bodega Bay, and found the schoolhouse used in the movie.  It was built in 1873 with classes for grades 1-8 on the first floor, while the second floor was used as a multi-use room and community hall.  By 1961 the building had been condemned and sold on auction to the highest bidder.  In March of 1962 Alfred Hitchcock used the school in “The Birds”.  The school then sat vacant and condemned until  June of 1966, when a family purchased it and worked to restore it.  It is still owned by the same family who now has three generations living there. A sign outside of the home advertises “for more information:  http://www.bodegaschool.com.