I take a walk for exercise most days and as I walk I pass a small cattle ranch which no longer has cattle.  The owner has replaced the cattle with two emus in his fenced-in front yard.  The emus are named Irma and Ellis and, and we have developed a relationship with them, as they like to hang out at the fence that fronts the road.   My wife in particular has developed a friendship with Irma, and Irma will eat chopped kale or lettuce out of her hand.

The emu is a native of Australia and standing about six feet tall is the second largest bird on the planet, after the ostrich.  It has long, spindly legs with big clawed feet, a body about the size of a small barrel covered with long grey feathers, and a long neck covered with downy grey feathers.  It is quite a runner, and this is its main defense.  The large eggs are dark green.  It is used by man for meat, eggs, and the healing oil which is found in its body. 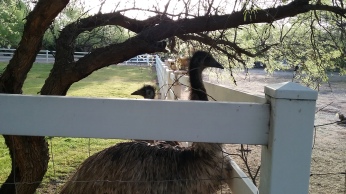 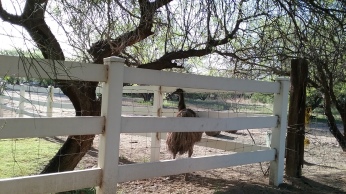 An interesting sequence of behaviors began occurring a few months ago.  Fran would go up to the fence and talk to Irma and stroke her long neck.  Irma would shut her eyes in pleasure.   Ellis was not interested in being stroked or fed at all but Irma looked forward to Fran’s visits and when stroked would go down on her knees on the ground.  Ellis began observing this behavior by Irma and, seizing the opportunity, would pounce on Irma’s back and begin the mating jiggle in the act of copulation.

This behavior repeated its itself for a few weeks and then my wife discovered that if she simply went up to Irma and talked to her in a soothing voice, with no petting, Irma would kneel down on the ground and the mating act would begin.  Ellis began to look forward to Fran’s visit as much as Irma, but for a different reason.  Just the sight of her and her voice had become the signal, the discriminative stimulus, for the mating behavior to begin.

I was a psychology major at the University of Illinois and the department had a strong Behaviorist orientation.  White Norwegian rats and pigeons were commonly put in “Skinner boxes” and taught to press a lever to get the desired food pellets.  Once they had learned how to use the lever to get food, a red light was introduced into the box and only when the red light was on could pressing the lever produce the food pellet.  Soon the animals would learn that the red light was the signal for pressing the lever, and that was the only time they would press it.  Fran had unwittingly become the discriminative stimulus for the emu fun to begin.

Now there is a straw nest with twelve large eggs sitting in it.  Interestingly, Irma rarely sits on the nest and Ellis has this job full-time.  Whether he likes this task is unclear, but he has learned that life is not all fun and no work.