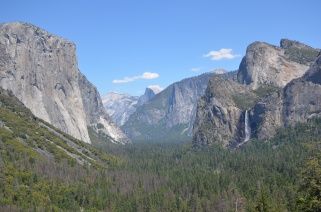 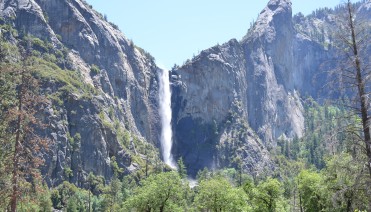 On day two of our visit to Yosemite, we decided to take a guided tour and learned some interesting things. For instance, the tallest sugar pine tree is in Yosemite (sugar pines are the tallest of the pine trees) and has the longest pine cones (from about 10 to 20 inches long).  No wonder those squirrels in the insurance commercial could dent that car! Bridalveil Fall was so named because it resembles a bride’s wedding veil. However, the waterfall did not evoke romantic notions with the Native Americans who lived nearby. Rather, they called it “Spirit of the Puffing Wind” and told their children that if they ventured too close, they could get carried away by that spirit!

The Tunnel View is one of the iconic scenes from Yosemite where one can see El Capitan, Clouds Rest, Half Dome, Sentinel Dome, Cathedral Rocks and Bridalveil Fall.  Its beauty is truly breath-taking! Our tour guide also showed us a “baby sequoia” that was about 150 years old (about the size of a normal pine tree).  We were able to see some  rock climbers who were protecting themselves against hot sun by enclosing themselves in some sort of protective wrap that made them look like giant beetles on El Capitan and other monoliths that were being scaled.  We also learned that two climbers had died the day before (brought up by one of the attendees on the tour).

Bears and other wildlife live in Yosemite as well, so there were bear-resistant enclosures all around the park. We were told the story about vistors eating lunch in one of the lodges when the park rangers sighted a bear outside the windows.  As the staff were trying to move visitors away to a safer area, a group of foreign tourists were eagerly taking photos.  Some of them even tried to go outside to get a better picture! Fortunately that story ended well.

One more day to visit…