On our way to Yosemite we decided to visit Mammoth Lakes, located in the Sierra Nevada Mountains. It is about 45 minutes from Tioga Pass, the east entrance to Yosemite National Park, and two hours from Mount Whitney, the highest peak in the contiguous United States (which we glimpse after we left the Death Valley corridor).  According to the visitor’s guide, Mammoth Lakes sits on the edge of the Long Valley Caldera, a 20-mile wide extinct “supervolcano” that erupted around 750,000 years ago.  Subsequent volcanic eruptions, earthquakes and glaciers formed the area that visitors flock to today for the natural beauty and the winter sports of skiing and snowboarding.  In fact, during our visit we saw people skiing down the slopes at the beginning of June!

Mammoth Lakes is home to the Inyo Craters, a consolidated gold mine, the Mammoth Lake Basin (which contains several lakes), an earthquake fault, Hot Creek geological site (which contains five hot springs and gas vents), and the beautiful Minaret Vista.  In the photos below one can see the Minarets, Mt. Ritter, and Banner Peak, the latter two being just beyond the Volcanic Ridge. 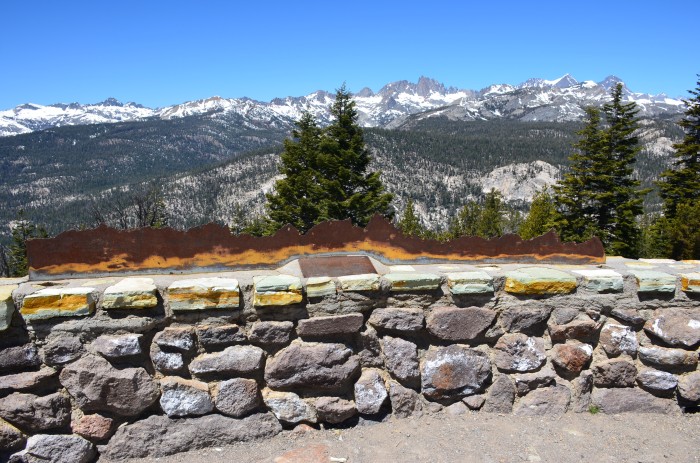 We certainly appreciate my brother Tracy’s suggestion to make this a stop on our journey!