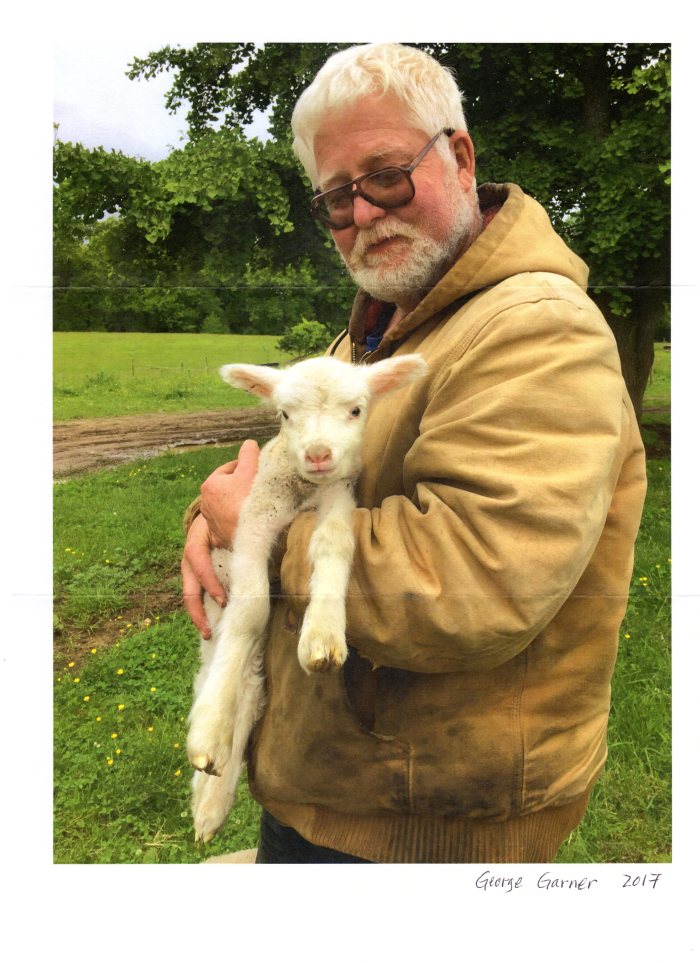 A couple of months ago we learned that a good friend, George Garner, had passed away last summer. We had planned to see George this year when we returned to visit family in Maryland. George had given us a wedding present, an Italian woodcut, that later became the cover of my book, Tremors in the Cloister.  It was my intention to give George a copy of the book when we saw him.

George left many friends behind. He was an intelligent, kind and gentle soul. George   was studying to become a priest in Rome when his father became ill.  George returned home and took over the family farm when his father passed away.  One of his neighbors contacted us after Fran had written something on George’s legacy page. She gave us this picture of George holding one of “his sweet little lambs”.

George was one member of a group of high school friends (including Fran) who gathered at a friend’s home for dinner on a regular basis. These friends had traveled to France together as members of their high school French club and had remained close over the years.  When the hostess, Jackie, developed breast cancer, one of George’s acts of kindness was taking her to chemotherapy sessions so that her husband would not have to miss time from work. When Jackie finally succumbed to her disease after a little over five years, the group tried to keep together, but eventually drifted apart as sad memories and a lack of a central location kept us from meeting together.  The last time we were all together was at Jackie’s husband’s (Tom) funeral service a few years ago. After we moved across country, the friendship drifted even further with no letters or cards from George.  The sad news about George’s passing has closed a chapter in the book of our lives.

I wasn’t expecting to attend the Tucson Festival of Books this year. After all, I have been struggling with health issues, and I didn’t have a “new” book this year (although the cookbook was still eligible).  So when my publisher sent an email regarding the location of their booth, I didn’t give it a thought.  Then I ran into a neighbor who had published a book last year who said that he was going to the festival. I thought, “Why not?” So we replied to the email, mapped out a few sessions  to attend, and took a few books with us to the festival. My wife made a few dozen cookies (fruit tarts) for people to sample. The cookies were a hit, the book sales not so much, though there were those who said that they were going to purchase them online when they returned home.  There was a concert scheduled at the end of the day with the band “The Rock Bottom Remainders” which included Dave Barry and Amy Tan, among others.  However, the cool weather with the threatening rain (piddling drops) helped with our decision to call it the end of  a very interesting day.